Showing posts from May, 2019
Show all 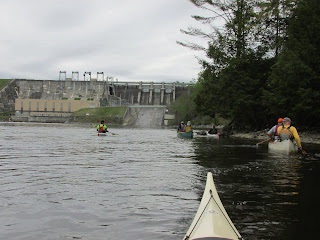 Spent three days last week with six other paddlers exploring the lake-like waters above and between two behemoth hydroelectric structures that effectively drowned the "Fifteen Mile Falls" section of the Connecticut River in northern New Hampshire and Vermont.  Before the two dams were built, the river dropped about 320' over about 15 miles and its tumbling waters comprised one of the longest stretches of whitewater in New England. In the opening photo we paddlers are feeling a tad small as we approach the Samuel C. Moore Hydro Station (blt.1957) said to be New England's largest conventional hydroelectric plant. The other behemoth, Frank D. Comerford Hydro Station (blt. 1930), sits 8 miles downriver... While paddling the two reservoirs (Comerford and Moore) created by these dams paddlers can only imagine how the river might have looked before 1930.   Besides examining old maps, one can get some idea of what the Fifteen Mile Falls were like by reading this art
Post a Comment
Read more

Connections on the Saco 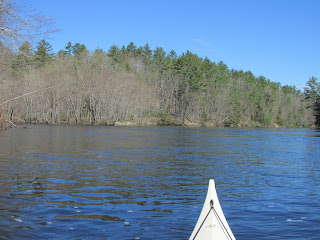 It was the above pictured confluence (Ossipee river to the left, Saco River to the right) that drew me to western Maine's Saco River Valley last week.  I'd read numerous historical accounts attesting to the confluence's significance as being an important junction of three Native American trails: the Sokokis Trail (Rt.5) reaching up from the south, the Ossipee Trail (Rt. 25) diverging to the west and alongside the Ossipee River, and the Pequawket Trail (Rt 113) continuing with the Saco River to the north and west towards its headwaters in New Hampshire's White Mountains. This was my first camping trip of the 2019 season and my tent had been pitched within a 2-mile radius of the confluence.   Somewhere within the same 2-mile radius was, more than likely, the trading post of Englishman Francis Small.  The 43 year old Small is said to have been the first European to venture into this area in 1668, and he began trading with the Sokokis band of Wabanakis people by allowin
Post a Comment
Read more
More posts