Showing posts from August, 2018
Show all

Waters Beyond the Mohawk Trail 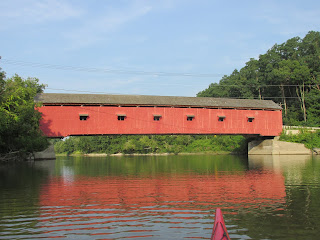 As a Massachusetts native, I've driven the Mohawk Trail on many occasions and, to be honest, wasn't really sure of where the trail began or ended at its western terminus.  I knew there was a Hoosic River flowing from the northwest corner of Massachusetts into and across Vermont's southwest corner and onward in a westerly direction to the Hudson River in New York.  What I didn't know was just how important a historical role the Hoosic River and its tributaries played in connecting with the Mohawk Trail. With a goal of paddling some Hoosic waters, I researched the river and stumbled upon the book The Hoosac Valley: Its Legends and Its History written by Grace Greylock Niles published in 1912.  In this book I read the riveting story of Fort Massachusetts and how it came under attack in August 1746.  It's a story I wasn't previously aware of and, therefore, on my drive along the Mohawk Trail, I made a point to pull into the shuttered-up Price Chopper parking lo
1 comment
Read more
More posts