Showing posts from April, 2019
Show all

The Eyes Have It 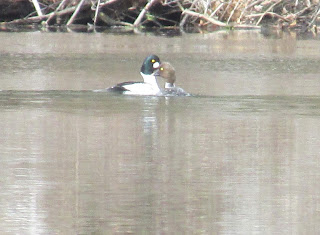 Launched into the Assabet River at Ice House Landing yesterday.  The launch site is only 3 miles from my home yet afforded me access to wildlife I'd formerly expected to drive a fair distance to see. It wasn't even my birthday, although apparently it was for someone else... Presents included the common goldeneye pair pictured in opening photo as well as this pair of common mergansers... The waters between the Stow Town Forest and Crow Island were being patrolled by a pair of bald eagles.  The adult eagle flew from Crow island across my path... ...to a perch on the Town Forest side... ...while what I believe is an immature eagle flew above me... The eagles were creating some commotion among the many varieties of ducks present. After landing back at Ice House the bright red of a pileated woodpecker caught my eye as I pulled out of the parking lot.  He was intent on his project and oblivious to my presence... He was only about 5 feet off the ground on
Post a Comment
Read more 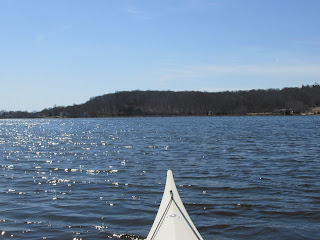 Shortly after launching into the Mystic River at River Road in Groton, CT last Wednesday, I got my first look at Pequot Hill rising above the  river's west shore.  The hill, where once a Native American (Pequot) fort stood, was first on my list of places to explore while spending 3 days plying the waters of southeast Connecticut and the southwest corner of Rhode Island.  Other places on my list were Porter's Rocks, Mason's Island, Barn Island, Little Narragansett Bay, Pawcatuck Rock, White Rock, and Potter Hill. It being early spring and mid-week afforded me the sense of having these places pretty much to myself.  Most of the other boats I saw were out of the water and encased in shrink-wrap.  The multitudes of boat slips were for the most part unoccupied. Paddling down the Mystic River I did encounter Stonington Crew getting in some practice... Mystic Seaport was viewed from the water... ...from which perspective the Joseph Conrad looks a little more impressiv
Post a Comment
Read more
More posts